As you may have recently seen in the press Arlingclose has been instrumental in undertaking the first interest rate swap transaction with a local authority since the early 1990s.

The components and payment flow of a swap (excluding lending margin) are shown below. The diagram illustrates how the floating element of the local authority’s debt costs are hedged and replaced with a fixed rate.

In terms of the economics of a swap the next illustration puts into context how debt costs remain constant even though short-term rates vary over the life of the swap contract. 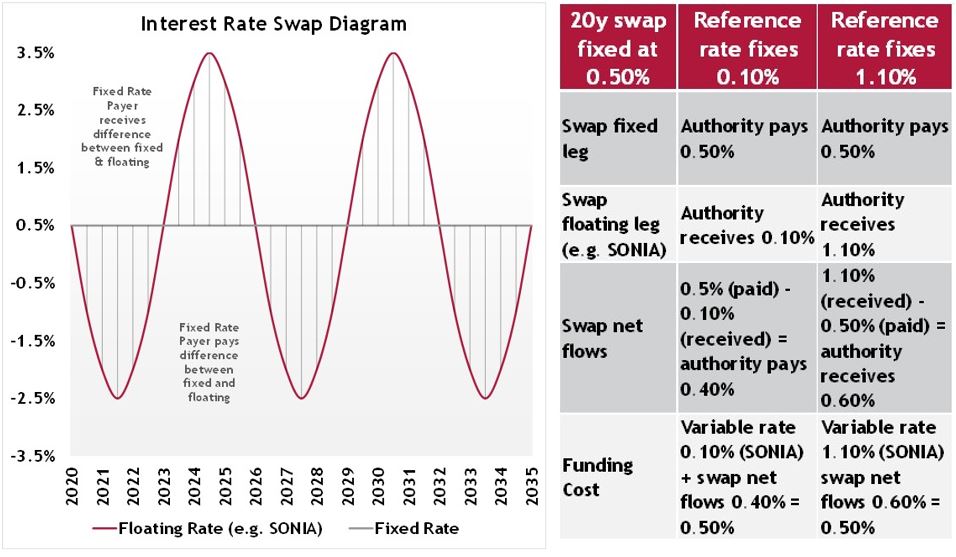 The above demonstrates that whatever happens to short-term rates the local authority’s debt costs will remain at 0.50% over a 20-year period. At times short-term rates could be lower but the basis for entering the swap is to protect against those periods when rates maybe higher and therefore provide certainty of cost.

Until now the only option for a local authority in terms of locking out the risk of rates increasing, was to take funding from the PWLB, but with rates some 20 times the equivalent short-term rates this is an expensive alternative.

Why has it taken 30 Years to get this done?

Those of you with long memories will recall the High Court case of Hazell v Hammersmith and Fulham (1992) which declared that local authorities had no power to engage in interest rate swap agreements because they were beyond the Council's borrowing powers, and that all the contracts were void as their actions were held to contravene the Local Government Act 1972.

However, the Localism Act 2011 has given local authorities in England the General Power of Competence and Section 1 this states that “A local authority has power to do anything that individuals generally may do” it is this power that has been relied upon to undertake the recent swap transaction.

The hangover of the 1992 case has taken a long time to clear and we have had to find both a local authority and bank that were willing to explore the concept and we now have successfully concluded this work through the recent transaction.

We do not see this as a commoditised transaction which was perhaps the case back in the 1990s and in more recent times with transactions such as LOBOs. Undertaking an innovative transaction such as this has required a great deal work by all parties involved to confirm that:

One of the key requirements from the swap counterparty was that the Council was correctly advised and throughout the transaction Arlingclose provided that advice to the Council.

Our analysis and recommendations were a key element of the Council being able to demonstrate to the counterparty that the swap was a suitable product to reduce interest rate risk in the short-term debt portfolio.

The support that we provide to the Council was not just limited to the approval process, we provided support through the contractual process of agreeing the Credit Support Annex and ISDA as well as being involved in overseeing the fair execution of the transaction.

Now that the swap is in place, we continue to support the Council in terms of the valuation of the swap as well as the necessary hedge accounting requirements that will need to be considered at year-end.

As always Arlingclose acted on a truly independent basis in this process only being renumerated by our local authority client and receiving no commissions or other inducements from the swap counterparty.

If you think that a swap is something you might wish to consider as a method of managing interest rate risk in your current or future debt portfolio, please contact Mark Swallow (mswallow@arlingclose.com ) to discuss.