How Slow Can You Go? David Green dgreen@arlingclose.com

On the evening of 30th April, Moody’s Investors Service made its first downwards revisions of the year on its credit ratings of UK banks and building societies. Its press release noted that the UK is one of the countries facing a severe and extensive credit shock from the coronavirus outbreak, and it expects the banking sector to be affected by the shock through weaker profits and higher bad debts.

No-one would disagree with that, but why did it take them so long to come to this obvious conclusion on five medium-sized lenders? And when will they have anything to say about the impact of the virus on our largest banks? They can’t believe it has no impact at all.

Moody’s peers were only a little timelier with their own announcements. S&P Global Ratings revised its outlook to negative on five UK banks a week earlier on 23rd April, expecting bank earnings, asset quality, and in some cases capitalisation, to weaken meaningfully over the coming year. Fitch Ratings was the first of the big three to act on 1st April, although in some cases this was just to announce a formal review of credit ratings that has yet to be concluded.

It has been clear for weeks, if not months, that the coronavirus was going to be a big problem for the financial sector. UK banks were in the mainstream news on 10th March, saying that they would offer repayment holidays on mortgages and small business loans as the scale of the pandemic became increasingly clear. Their share prices started falling around 10th February and were at 12-month lows by the end of that month, finally hitting the bottom on 3rd April.

Credit default swaps are another financial market-based indicator, rather like insurance policies against bank default, with higher premiums indicating higher risk. They started rising in late February and were far above normal levels by 12th March. 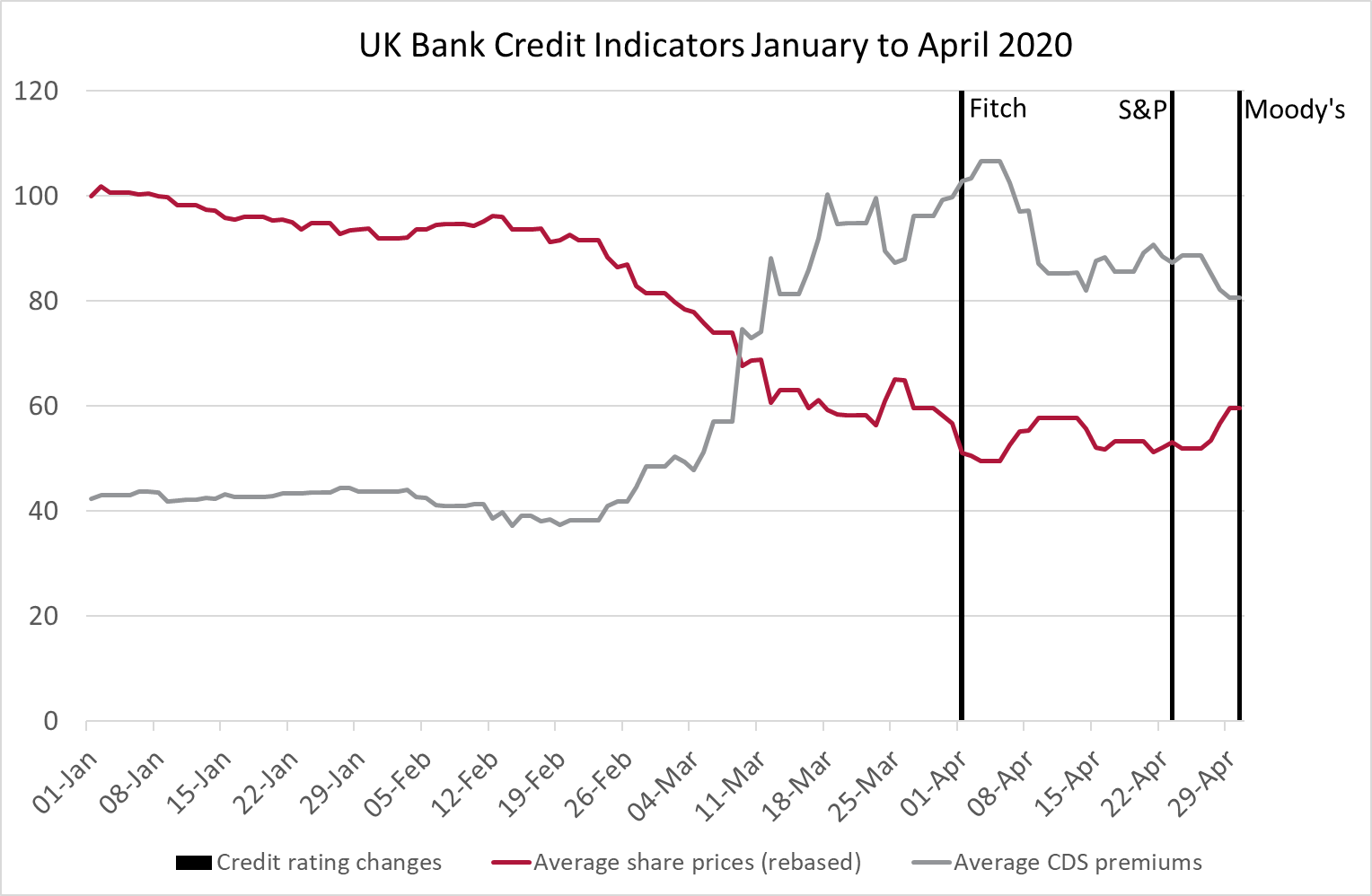 The rating agencies would say in their defence that they are very thorough in their analysis. They only change credit ratings after a detailed review of all the available information, interviews with management and measured consideration at a ratings committee. There can also be a delay if the bank appeals against the rating change. But investors relying on credit ratings should be disappointed at S&P taking six weeks and Moody’s seven weeks since the scale of the crisis was clear in mid-March to take any rating action. If this is their response time to blindingly obvious events, how much slower are they to build important but less publicised factors into their ratings?

Now, you might not expect much from what appears to be a free service. But Moody’s largest customer pays $2.7 million a year to be credit rated on behalf of its investors, while S&P typically charges up to $500,000. And while credit ratings are available for free on the agency websites, if you want to be alerted to changes when they happen then you need to pay. Most local authorities buy credit rating alerts as part of a package of services from a treasury advisor, so may not see the cost directly, but they are definitely paying for this behind-the-times information.

Until fairly recently, both CIPFA and government guidance required local authorities to take account of the ratings issued by Fitch, Moody’s and S&P. But they now have realised that insisting on councils buying from named companies does not create the best value for money and have changed their statutory guidance to give authorities more discretion when evaluating credit risk.

With continuing pressure on costs, and ever-reducing use of bank deposits in favour of money market funds and loans to other local authorities, treasury managers should start asking themselves whether they still need to be paying for weeks and months-old information on bank creditworthiness from three credit rating agencies.