Back in March, and what feels like a lifetime ago to many, we witnessed two cuts in the UK’s official Bank Rate, taking us to floor-scraping levels of 0.1%, the lowest level ever recorded. Policymakers at the Bank of England voted unanimously for the reduction to mitigate the economic shock caused by coronavirus (a sure winner for most used word of 2020, the second being ‘unprecedented’…)

The obvious answer is that spreads have widened, particularly for higher loan-to-value (LTV) mortgages. When the economic outlook worsens or becomes more uncertain, lenders tend to charge higher interest rates to compensate for the additional risk they are taking. This is shown in the chart below from the Monetary Policy Report, showing rates on fixed rate mortgages: 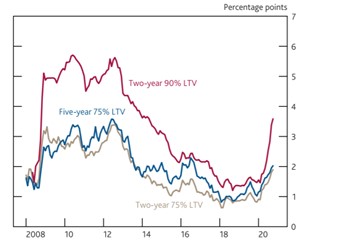 As well as raising rates, the Bank of England’s Credit Conditions Survey showed that banks and other lenders have also tightened their credit scoring criteria on all consumer credit to mitigate the risk of defaulting loans.

The reduction in the availability of mortgage products has prompted mortgage rate inflation. At the onset of the pandemic, we saw many lenders refrain from offering their usual, extensive product range, due to operational issues such as staff shortages, but also constraints on physical property valuations - the decrease in competition prompted an increase in rates. Only now have some lenders have begun to reintroduce mortgage products.

Meanwhile, despite the global pandemic, the housing market continues to defy reality, with demand only growing stronger. Mortgage approvals were reported at 91,000 in the month of September - the largest number of approvals recorded in a single month since 2007. A major driver in the increased demand since April has been attributable to the Stamp Duty holiday of which many consumers, particularly first-time buyers, have been eager to reap the benefits. Alongside this, we have certainly seen some pent-up demand from the effective closure of the housing market for nearly two months from March to May.

A report by Rightmove has shown a significant boost in demand for consumers trading in their city homes for the countryside, as they get comfortable with the new norm of working from home.

Whatever the reason, it is certainly pushing up the demand for new mortgages and therefore the lending rates…