What could a hard Brexit mean for investors?

As negotiations continue between Theresa May and Jean-Claude Juncker, many are discussing whether we are going to have a hard or a soft Brexit. What does this mean exactly? A soft exit is effectively a partial exit where we would remain in the single market in exchange for free movement of labour into the UK. A hard exit would mean we would completely exit the EU allowing us to have full control of our borders but would be subject to trade tariffs with the EU, whom we rely heavily on for both imports and exports. Most believe that a hard Brexit would initially have the most negative effect on UK growth but what other factors should we consider?

In terms of credit ratings, there is the immediate risk that the UK sovereign rating would be placed under review with negative implications leading to a further downgrade in the medium term. This would, other things being equal, lead to additional funding costs for UK borrowers including local authorities.

In terms of the credit quality of specific UK banks, we would also expect any downgrade in sovereign rating to eventually place individual ratings under pressure. A competing pressure would be the impact of further legislative changes underway with banks to address their susceptibility to broader credit events. The most notable of these is the ring-fencing of UK banks which will effectively split banks into two reflecting their retail bank (low risk) and/or investment bank (higher risk) operations.

Arlingclose has already adjusted its advice to our clients earlier this year to reflect the uncertainty surrounding ring-fencing. That change in advice restricted the maximum duration of unsecured investments with UK banks where their intentions under ring-fencing remain unclear.

A hard Brexit, if the financial market’s response to the referendum result is used as a guide, would possibly lead to downward pressure on UK Gilt yields (the cost of Government borrowing). This would be as a result of the broader negative shock to UK economic growth that a hard Brexit outcome would initially deliver.

In broader economic terms, the value of sterling would be expected to decline further leading to further inflationary pressures down the line given the UK’s net trade position (the UK imports more than it exports and imports would cost more as the value of sterling falls). Increase expectations for inflation would typically generate upward pressures on Gilt yield but whether these would exceed the downward pressures associated with the expected economic growth shock would be played out by the forces of demand and supply in the financial markets.

A local authority’s investment strategy should ensure that its day-to-day cash-flow requirements are reflected in its treasury management investment activities. A proportion of its funds should be invested on a notice or daily liquidity basis to meet these requirements whilst there remains a significant source of short-term borrowing from other local authorities should unexpected liquidity requirements exceed those plans.

Clearly, if a local authority suffered liquidity issues, for example it was unable to access notice accounts or its Money Market Fund accounts then it is likely that other UK local authorities would be seriously affected and this would create a liquidity crunch within the sector. We view this as a very low risk scenario for the following reasons:

Regulatory change on banks has enhanced their capital requirements
Regulatory change in the MMF sector is designed to provide further protection against significant credit orientated shocks whilst the diversification attributes of MMFs also provides lower credit and liquidity risk
Bail-in increases liquidity risk since any local authority unsecured investments with banks (either directly or via MMFs) would be subject to bail-in and a ‘haircut’ under a scenario where bank’s financial positions deteriorated rapidly to the extent that the regulators enforced a bail-in.

The risk for price increases post Brexit will be initially reliant on whether we see even more imported inflation as a consequence of an adverse change in the value of sterling. The pound has strengthened since its low in August but any further shock from a hard Brexit could see sterling weaken yet again, raising inflation above target.

The Bank of England has outlined a remote scenario in its planning where inflation rose (in response to weaker sterling) as a consequence of a hard Brexit and broader economic growth declined. In this scenario it would likely raise interest rates to reduce inflation despite the backdrop of a weaker economy that could benefit from lower interest rates. However, if interest rates were to rise further above 0.50%, this would attract increased demand for sterling causing it to appreciate thus reducing inflation from imported goods which is a major driver of the measure.

Inflation is expected to peak at around 3% in the current cycle but could be more stubborn to reduce if a hard Brexit occurred. One way for a local authorities to avoid real losses is by diversifying their investment portfolios away from nominal cash rates of return. As for debt, higher inflation effectively erodes the value of its outstanding debt.

A hard Brexit is, on balance, likely to raise inflation risk and would need to be considered under future treasury management strategies.

A hard Brexit will result in a range of competing pressures on UK interest rates. Whilst in the short-term volatility would be expected, possibly to relatively extreme levels in response to the initial uncertainty. In the medium to longer term interest rates are likely to remain in a relatively narrow ‘channel’ reflecting those competing pressures outlined elsewhere in this commentary (refinancing risk). The Arlingclose interest rate forecast reflects this. 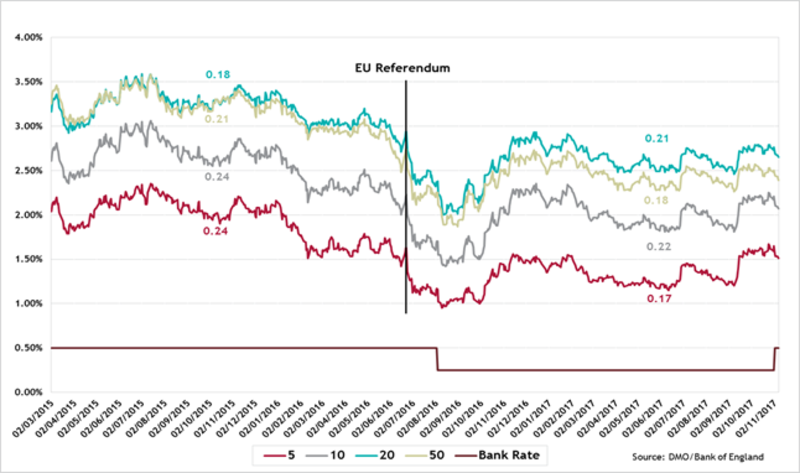 It is interesting to note that despite the volatility in interest rates around the June 2016 EU Referendum the volatility in interest rates in the 15 months since is almost identical to the 15 months prior to the Referendum. The chart above illustrates this point and also provides near identical measures of volatility (standard deviations) for 5, 10, 20 and 50 year PWLB Certainty Rates of interest before and after the referendum.