A COVID-19 vaccine is the current ‘holy grail’ of the medical, political and economical world. Universities, pharmaceutical firms and scientists alike are trying to find that elusive but essential piece of the puzzle to defeat COVID-19. Oxford University is currently carrying out a series of safety trials for a much-awaited vaccine and various different methodologies are being implemented globally. Philanthropists are also getting involved; Bill Gates announcing the personal funding of seven different testing avenues. Pharmaceutical companies are falling over themselves to try and create a vaccine; for the company that succeeds, handsome rewards no doubt lie in wait.

With the arrival of a vaccine being of global importance, it is no surprise that the stock market can be affected by news (both good and bad). Outlined below are two of many examples that prove this point.

The first example is Gilead Sciences who, according to their website, are a ‘research-based biopharmaceutical company focused on the discovery, development, and commercialization of innovative medicines’. On April 29th, Gilead Sciences announced results from a trial of its antiviral drug, remdesivir, which is hoping to provide a cure for coronavirus.

The results showed that the drug was effective in treating more severe cases of COVID-19 and also that a 5 day course was just as effective as a 10 day course, indicating that there will be a larger supply of the drug available. Compared to previous drug fails, this was hugely positive news. The graph below shows the S&P 500’s reaction to the positive news, increasing by 2.6% on the day.

It is interesting to note that remdesivir has not actually been approved to treat any diseases and yet the market reacted in such a strong way to news about success in one trial. Keeping the market’s current reactive nature in mind, the S&P then decreased by 4.5% over the following few days after various comments including one by Scott Gottlieb (former commissioner of the Food and Drug Administration) who stated on CNBC that while the drug itself was promising and could help to reduce the length of illness, it was “not a home run, a cure by any means”. While breakthroughs like this of course are important and anything to help treat the coronavirus will be welcomed, stock markets are really looking for a preventive option.

The second, more recent, example, concerns another American biotech company, Moderna. On May 18th, Moderna released data from a phase 1 trial which showed that its vaccine contender allowed for 100% of the 45 participants to develop the correct antibodies. The biotech’s firm share spiked to $87 on the day which was a 20 dollar increase from its close on Friday, ultimately closing at $80. The firm’s stock valuation was close to $29 billion, which is astonishing considering that its current product portfolio contains a grand total of zero products.

The S&P’ 500’s reaction was similarly positive; increasing by 2.63% (see the below graph – note the gap in the data indicates the close of markets on Friday and the reopening on Monday). This had investors abuzz with speculation that this could be the major breakthrough that everyone was hoping for. It was, indeed, an excellent day for global equity markets with the FTSE 100 and the Dow Jones increasing by 4% and 3% respectively. Further good news game from the chairman of the Fed, Jerome Powell stating that he would continue to support the US economy if needed and France and Germany agreeing to plans for a €500bn reconstruction plan. 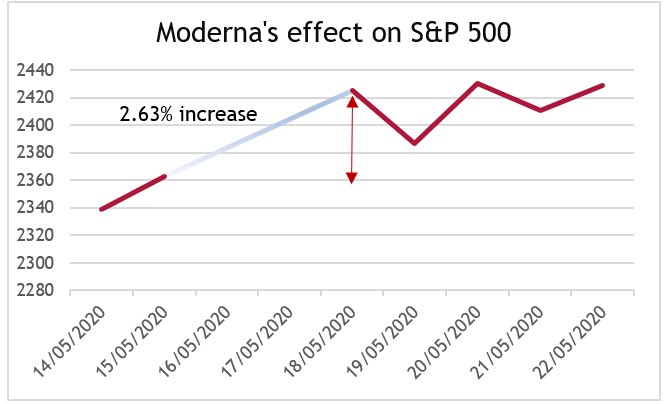 Unfortunately for Moderna however, a report was published the very next day on STAT – a renowned healthcare news and reporting website. This report questioned Moderna’s findings, or, rather, lack of them. The report questioned the inconclusive data and commentators were quick to flag that the information brought forward by Moderna was more qualitative than quantitative, i.e. there were too many words and not enough numbers. The release of this report damaged the company’s share price causing a 10% fall by the 21st May, which brought the overall price back down to $67 per share - markets followed suit and fell following the report’s findings.

This volatility within stock markets can be further emphasized as when the Director of the National Institute of Allergy and Infectious Diseases, Dr Anthony Fauci, spoke out positively about these trials on Friday 22nd May, Moderna’s share price increased just shy of 2%.

It is clear that market volatility is heightened and reacting to positive or negative news on vaccines. William Sels, global chief market strategist at HSBC Private Banking, sums this point up nicely, “when you have a lack of clarity in the market, any kind of headline with some credibility to it is going to lead to quite sharp swings”.

Having shown the volatility in the markets that is occurring as as a direct result of vaccine speculation, it is important to flag that markets are pricing in that a vaccine will be readily available within 12 – 18 months.  However, even on the most accelerated timelines, scientists have admitted that this is highly unlikely. To put this into some perspective, the Ebola vaccine broke records by becoming the fastest cultivated vaccine to date, taking a ‘mere’ 5 years to be brought to market.

Unfortunately, the lengthy process of the creation and distribution of a vaccine to the masses hinders a quick and easy solution that markets are yearning for worldwide. With there being so much uncertainty on when the world will go back to normal or even finding a vaccine, let alone mass producing it, this increased volatility in financial markets is here to stay and equities will continue jumping and tripping up on vaccine news flow.