Whatever you think of Boris Johnson’s conservative government, there was always something to talk about, whether it was the handling of major crises such as the pandemic or decision-making around smaller issues, such as government appointments and policies. Now Boris has resigned, the election of the new Conservative leader and de facto Prime Minister has begun. Manifestos are being written, videos produced, and promises made. Future government policy is now more uncertain, but what does that mean for bond yields?

Whenever there is a change of leader and, essentially, government, there is the inevitable change of policy to reflect the incoming Prime Ministers wishes. However, this change in policy normally takes some time, although there will be clues in the promises made during the election process. Notably, however, 30 days after each transfer of power the 10Y gilt yield was down an average of 24 basis points [see chart below]. This is a point in time that fiscally very little will have changed, the current account balance unchanged and the implementation of budget and infrastructure bills will not have gone through government. Therefore, the only things to have changed would be external factors; the general economic environment (such as inflation), and perception of the new government.

Notably, the changes in gilt yields for the Brown-Cameron change occurred through an election with promises of austerity and fiscal turnaround. As a result, the 10Y gilt dropped markedly, whereas the Cameron-May transition more likely reflects the political uncertainty around Brexit, and the economic impact of a softer Brexit delivered by May and yields staying relatively flat. The May-Johnson transition saw a downturn in yields, in the immediate aftermath of the change, perhaps reflecting the potentially worse political hard-Brexit scenario. This suggests the degree of political uncertainty is likely backed by economic circumstance, and yields are perhaps driven in conjunction with the political change, not as a result of it.

Should the forthcoming transfer of power from Boris Johnson to whomever takes over from him be viewed as a similar turning point? It is unlikely, whilst uncertainty breeds gilt purchases and falls in yields, the surrounding economic uncertainty is likely to drive yields higher.

Depending on who comes out on top of the political dogfight, tax appears to be the issue of choice going into the leadership contest, pitching Sunak’s fiscal prudence against most other contenders’ opposition to tax hikes. Sunak’s prudence could be perceived as a steady hand on government and lead to a post transfer of power increase in yields, whereas other candidates’ cuts in taxes and government spending could also lead to an increase in yields as the “brakes” are taken off the economy.  Either way, post transfer of power, this time around could lead to a relief trade and an increase in yields. 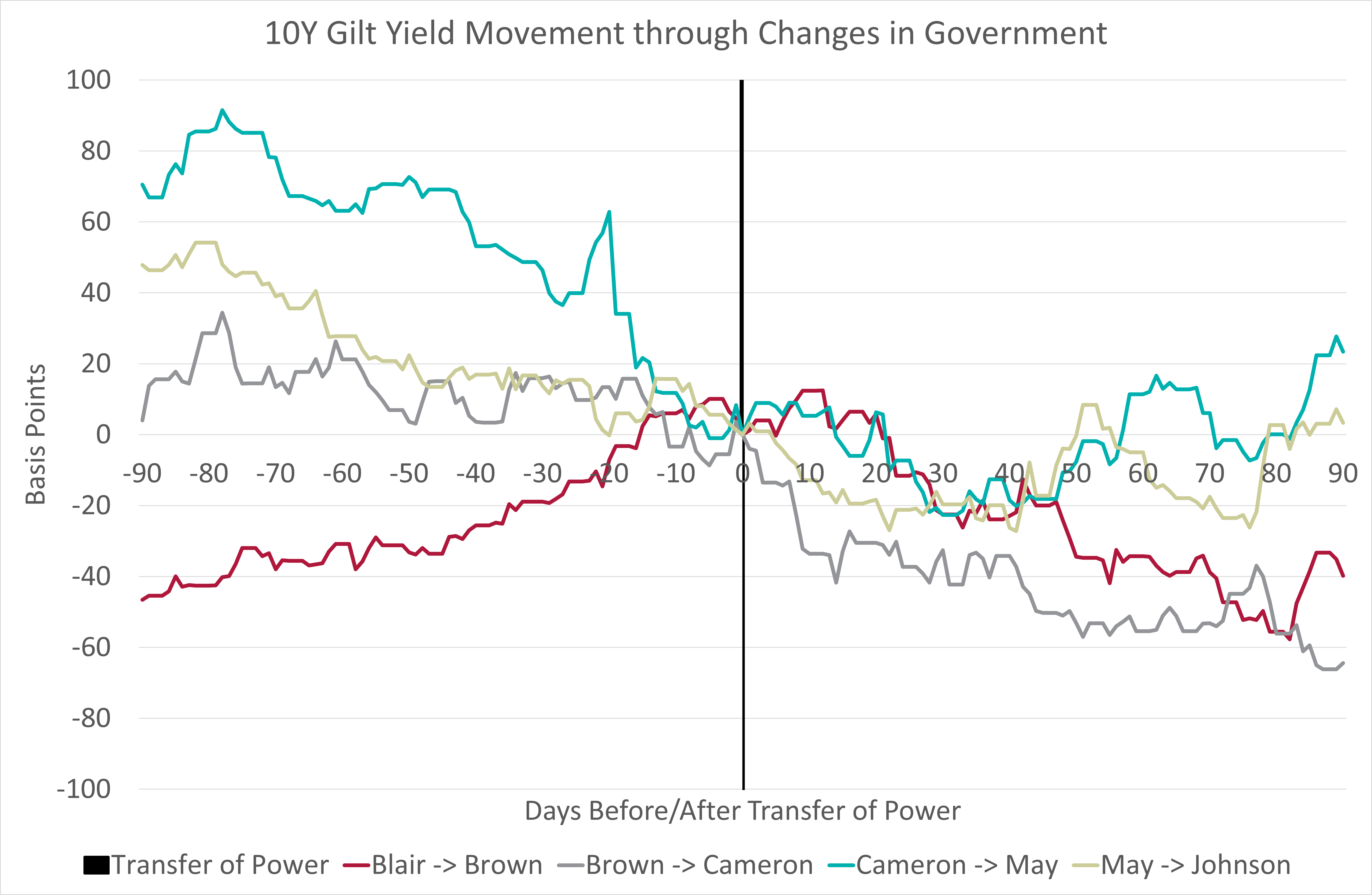