Replacing the London Interbank Offered Rate (LIBOR) is now rapidly approaching a conclusion, with the regulatory transition date set for the end of December 2021. While local authorities will have minimal direct contractual exposure to LIBOR, most Private Finance Initiatives (PFI) projects will reference the outgoing benchmark.

The Infrastructure and Projects Authority (IPA) has written to PFI contracting authorities highlighting the expectation that many will need to provide written consent to changes in financing documentation, as LIBOR is replaced with the Sterling Overnight Index Average (SONIA). Most changes are expected to be “neutral” – no gain, no loss. In this note we explore the most common type of LIBOR exposure and consider the necessary changes to finance documents to ensure a neutral outcome.

PFI agreements typically include private sector funding where long-term loans are agreed on a floating rate basis, referencing LIBOR, with a corresponding interest rate swap that neutralises the borrower’s rate risk, converting the floating rate debt to fixed. This is shown in the diagram below: 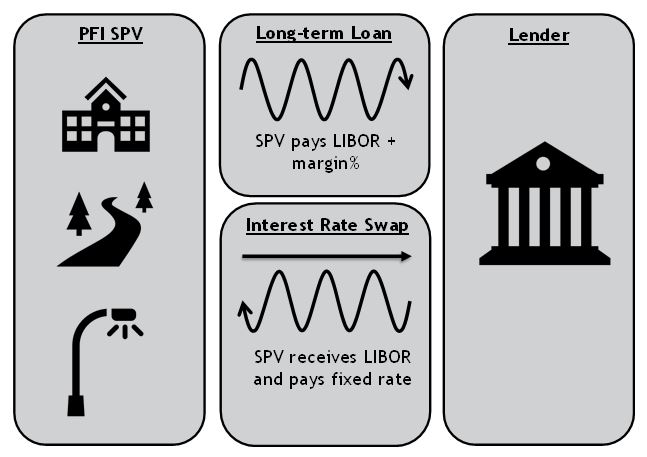 The LIBOR cash flows paid to the lender under the loan agreement are neutralised by LIBOR cash flows received under the swap arrangement, leaving the SPV with no LIBOR exposure, just a net fixed rate cost, including the lenders margin. So how will replacing LIBOR with SONIA affect PFI deals? Well, assuming the above structure, the impact should be neutral, as the floating loan rate paid to the bank will be offset by the floating rate received under the swap, with both now referencing SONIA. However, there may be some operational difficulties around timing and rate resets, as LIBOR is forward looking while SONIA is backward looking and based on observed rates.

Further thought will be required where there is a positive or negative net exposure to LIBOR, rather than the neutral exposure outlined above. LIBOR rates contain an expression of bank credit risk whereas SONIA is near risk-free, meaning it will usually be lower than LIBOR. A straight switch between the two rates could significantly benefit one counterparty (e.g.in lower borrowing costs) and make the other much worse off (e.g. in lower investment returns). Current market pricing on the fixed legs of SONIA and LIBOR swaps highlights the difference in current market perceptions of the two benchmarks:

This spread between SONIA and LIBOR will also be relevant where swaps rates are applied to calculate premature termination costs, market values and collateral payments. Calculating termination costs using a higher discount rate is preferable for borrowers in the scenario shown above, so they will want to ensure that where SONIA replaces LIBOR in termination clauses the difference is indeed neutral. The above spreads may appear small but when applied to break costs on multi-million-pound long-term agreements they will make a significant difference.

To deal with this, a ‘Credit Adjustment Spread’ (CAS) incorporating this difference will need to be agreed and documented by counterparties. The Bank of England’s Working Group on Sterling Risk-Free Reference Rates has undertaken consultation in this area, publishing guidance on two methods of calculating the CAS.  The five-year historical median approach is based on historical differences between GBP LIBOR and the SONIA compounded in arrears. The main alternative is the “forward approach”, based on the forward-looking swap market. However, as the guidance notes, “ultimately, the approach to active transition and the CAS is for lenders and their borrowers to determine”.

How smoothly the transition from LIBOR to SONIA occurs within PFI projects may be dependent on current project performance and the contracting authority’s relationship with PFI operators. Those harbouring grievance regarding project performance, or situations where project requirements have changed substantially, may view the chance to discuss changes to loan documentation as a wider opportunity to renegotiate or prematurely terminate contracts.

However, the transition working group and the International Swaps and Derivatives Association has established “fallback rates” that can be applied to legacy contracts, incorporating an adjustment to the SONIA rate using the 5-year historical mean approach. While these fallback rates could be applied in the absence of revised documentation when LIBOR ends, it will be preferable for counterparties to renegotiate contracts in advance.

The IPA expect that unitary payments under PFI projects will be unaffected by this regulatory change and they do not expect that project agreements will require amendment unless LIBOR is directly referenced. However, as local authorities will be asked to consent to documentation changes relating to the underling financial arrangements, they have been urged to consider these issues and the approval steps and timescales involved.

If you require further support in this area please contact David Blake at dblake@arlingclose.com