An unusual and unwelcome event has happened in UK financial markets over the past couple of months; the development of a negative yield curve at the short end of the sovereign curve. A negative yield curve is generally taken as the precursor of slower growth and even recession; while slower UK economic growth is widely expected, there are few central case expectations of prolonged negative growth unless in the case of a no-deal Brexit. So, has this latter event become the central expectation or is something else driving the yield curve?

At its most basic, a yield curve imparts the market’s expectation of the direction of interest rates. A decline in the yield curve suggests lower forward rates, reducing the average rate over the period. Figure 1 displays the UK government yield curve on Bloomberg, starting at three months and continuing until eight years. The one,  three and six month points are treasury bill yields, with gilt yields from one year onwards. After peaking at 0.77% for six months, yields decline to 0.56% around three years, before rising back to around the 0.75% level at eight years. 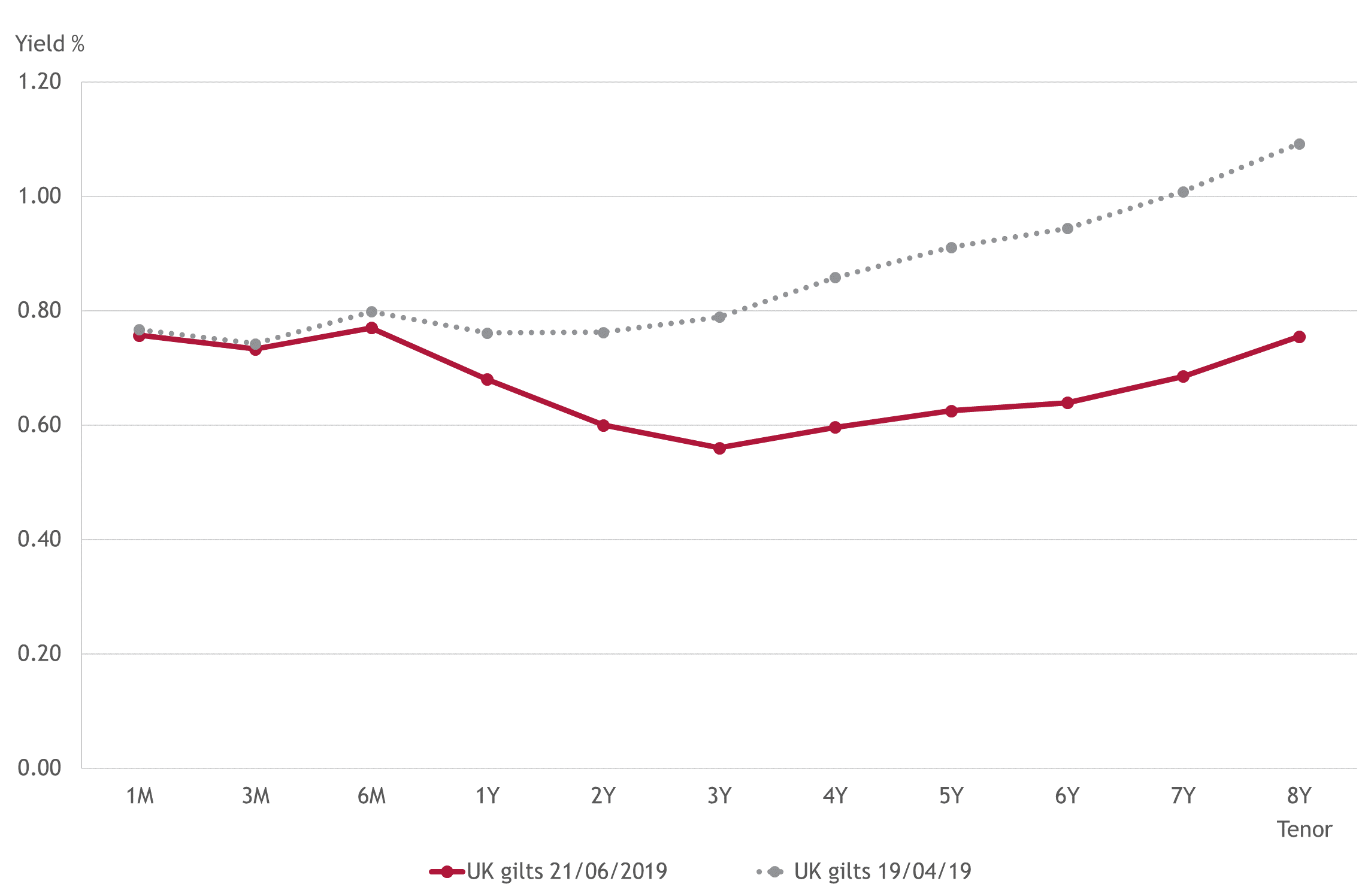 Despite the more hawkish views of some MPC members and UK economic data generally coming in on the stronger side of forecasts, the market appears to believe a much more dovish outlook for rates is appropriate. Indeed, overnight interest rate swaps indicate a 20% chance of a Bank Rate cut by the end of 2019.

Figure 2 indicates that the negative yield curve is not just a UK phenomenon, with German and US curves following the same path. It was, in fact, changing US economic expectations that prompted these reversals and, unsurprisingly perhaps given its much higher levels, the US curve shows the steepest decline. 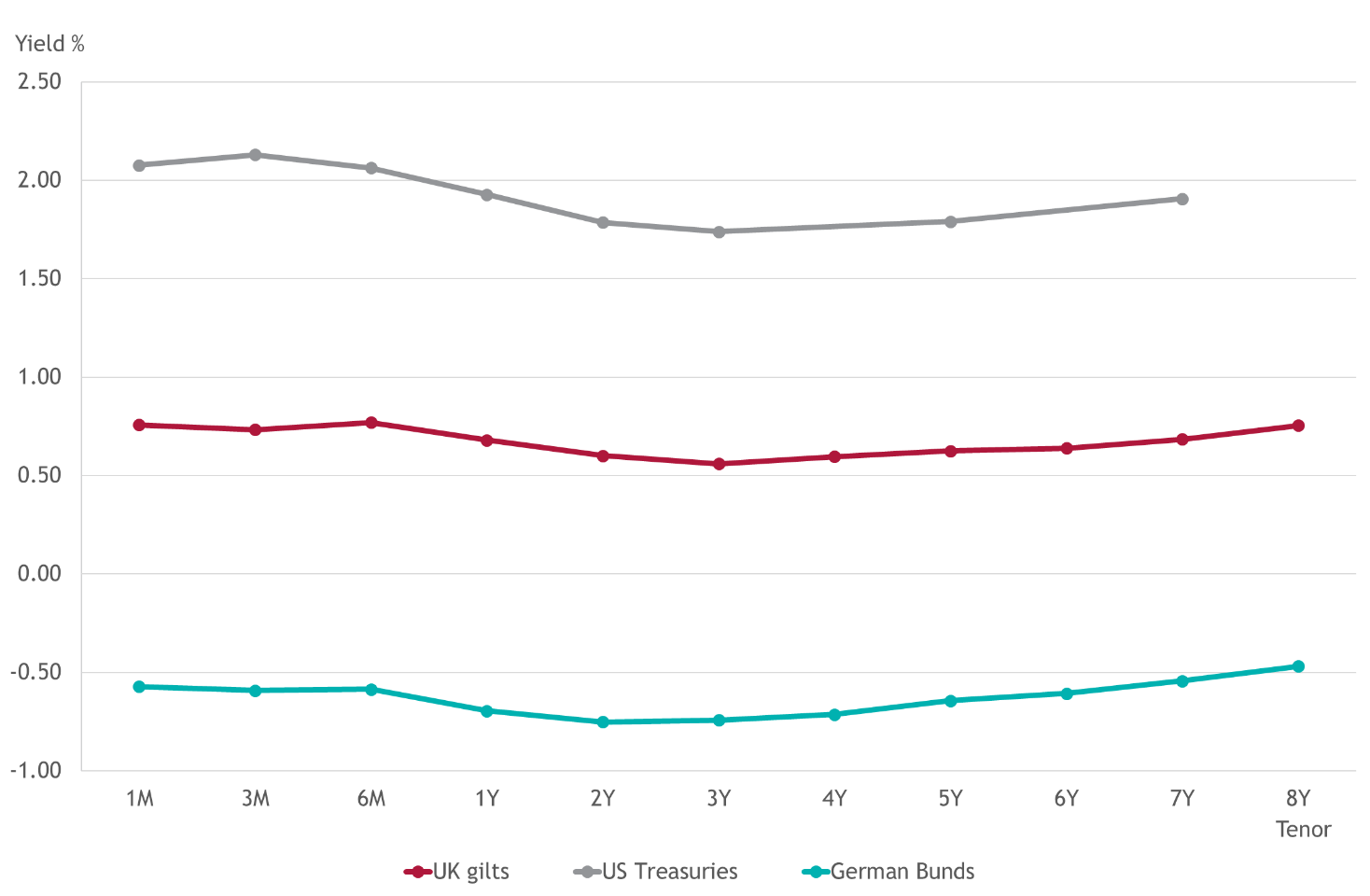 After raising rates on the back of strong US economic growth, but amid Donald Trump’s increasingly protectionist policy stance, the FOMC initially paused tightening policy earlier this year (much to the market’s relief) before adopting a more dovish tone. US economic data has recently been undershooting projections, illustrated by the woeful June non-farm payrolls release, as the manufacturing sector struggles with the global trade war. There are now widespread expectations for the FOMC to cut the Fed Funds rate either in July or September.

The weakening global economy thus appears to be the primary driver of the decline in yields. Slower economic growth has or is expected to place pressure on central banks to loosen monetary policy.

So, does this mean that Brexit is irrelevant? Domestic uncertainty driven by Brexit allied with global weakness is a dire combination for a UK economy reliant on household spending. The favoured candidate for the Conservative leader and so Prime Minister favours leaving the EU on 31 October, but this appears unrealistic when faced with a parliament that is both against no-deal and the only deal on the table. Renegotiation of the deal, at least before the current deadline, also appears unlikely. With this seemingly tangled web hampering any resolution, it’s no surprise that economists have recently increased their expectations of a no-deal Brexit.

There is no doubt that Brexit has dampened UK rates and rate expectations, but it is only one of the issues on which global markets are focussed. Which leads to another question; even if the UK were to agree a deal with the EU, removing the more severe downside risks to growth, will the MPC feel able to raise interest rates during a period of global economic weakness? The MPC will have to weigh its fears of domestically generated inflation against the possibly weak external economic environment. In the past, the MPC has looked through external inflationary implications, but taking a contradictory stance to the rest of the world, which could lead to importing deflation while net trade wanes, is likely to challenge its monetary policy remit. Yesterday’s minutes of the MPC meeting, indicating a Committee leaning towards a more dovish outlook, suggests most policymakers are already aware of this.