The last couple of weeks have been a reminder that, when looking at counterparty and credit risk, the UK’s 500 local authorities are not all the same. Moody’s downgraded both Warrington Borough Council and Transport for London, the Department for Levelling Up, Housing and Communities (DLUHC) proposed new measures to address risk in capital investment and borrowing, and HM Treasury threatened to stop lending to local authorities where there is a more than negligible risk that the loan will not be repaid without future government support.

Moody’s rating changes were a good insight into how their analysts view local authority credit.  Its reviews of Warrington Borough Council and Guildford Borough Council noted that both authorities have relatively high and increasing debt, ongoing budgetary pressures and projected reductions in reserves. But Warrington was downgraded to A3, three notches below the UK Government, while Guildford was affirmed at Aa3, level with central government. One key difference noted is that Guildford has one of the highest levels of revenue reserves in the country at 112% of annual income, while Warrington’s buffers are much more modest at 19%. 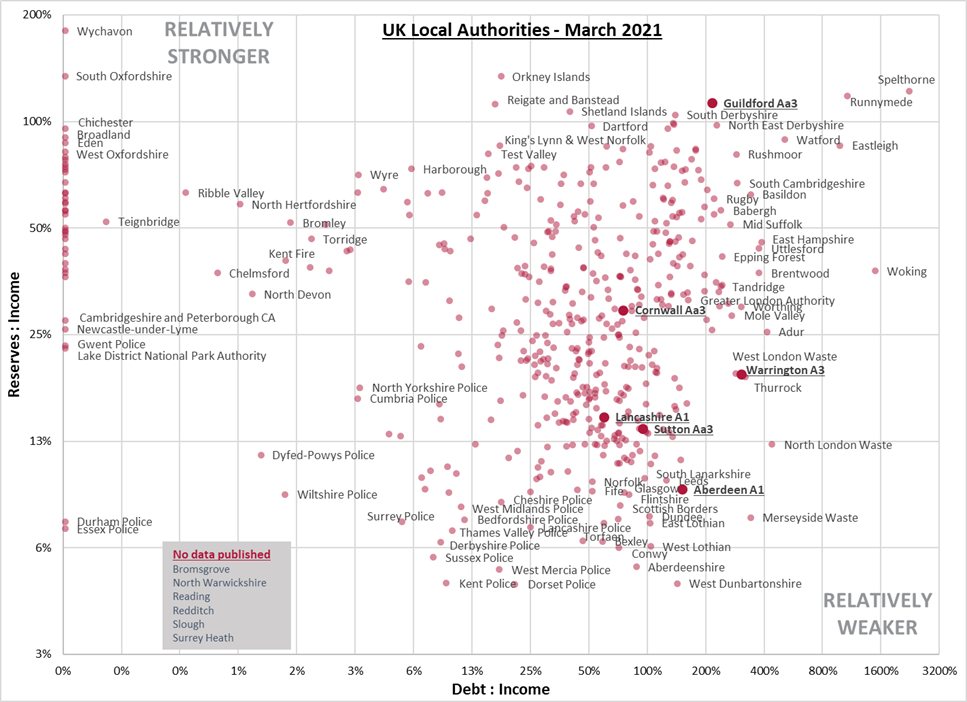 Analysis of government published data for England and statements of accounts for the rest of the country shows a wide variety in levels of debt and revenue reserves as a proportion of revenue income. Spelthorne Borough Council’s well publicised investment strategy has left it with high debt, but it is one of only nine authorities to have more than a year’s income put aside in reserves to cover unexpected events. At the other end of the scale, many Police and Crime Commissioners have less than a month’s revenue income in reserve, but they tend to have relatively low debt too.

Wychavon District Council is the strongest authority on these measures, being debt-free and holding reserves of 180% of income. There several contenders for the weakest link, including six authorities who have yet to publish any data for 2020/21.

Of course, 2020/21 was hardly a typical year, and the 2022 chart may look quite different. Hopefully the pandemic-induced delays to reporting will improve, enabling some more timely analysis in future.

The data behind this chart is available to Arlingclose clients here.

Interestingly, DLUHC’s new risk metrics that can prompt engagement cover high levels of debt and commercial investments but ignore risk-mitigating measures such as liquidity and reserves. Of course, low reserves may lead to a section 114 report which is another route to government intervention.

CIPFA’s Treasury Management Code is very clear that every public body should hold “well-documented records of the standing of counterparties it does or may deal with and continuous access to independent sources of advice and information on the same”.

This raises the question of what outcomes we are trying to avoid. The legislative framework and lender of last resort means local authorities are very unlikely to default, and lenders are even less likely to incur a permanent loss following a default. But counterparty risk is more than just credit risk. What is the reputational risk or the administrative headache of lending to an authority where government has intervened? What will elected councillors or the local press think?

HM Treasury’s approach of refusing to lend, or at least limiting loan length, if they are worried about the risk of non-repayment may be novel in the public sector, but is standard credit risk management practice elsewhere. Limiting loan size is another useful tool that lenders can employ to minimise loss, if not default. Formal loan documentation will also help if you need to start proceedings.

Debt, reserves and income are three of the five credit risk measures in Arlingclose’s financial strength ratings, the other two being interest cost and budgetary control. These use 20 ratios updated quarterly and published on our iDealTrade.net platform for loans between local authorities, where you can see the credit strength of your counterparty before you agree a trade backed with a full loan contract.

These financial strength ratings are also available to purchase in bulk from Arlingclose, together with shadow credit ratings. Please get in touch at info@arlingclose.com if you are interested in a full set of local authority credit data.

Potential MMF Regulatory Reform - where are we now?