How low can we go, and how fast will we get there? Mark Horsfield mhorsfield@arlingclose.com

The GfK consumer confidence survey takes place each month in the UK, and attempts to record the attitudes of UK residents to the state of their own finances, the general economy and their appetite for making major purchases.

Just occasionally in the wake of some major event or issue GfK will issue an additional “flash report”, a good example being the measure taken immediately after the Brexit June 2016 Referendum  which saw the overall figure of confidence record a fall from -1 to -8, and then by a further 3 points to -12 at the conventional recording. That 11 point fall was huge, the biggest month on month drop for over 26 years dating back to March 1990!

What does a -12 reading mean? The GfK survey is a balanced indicator, so a reading of 0 implies neutrality of feeling on average; so at the extremes either 50% of respondents were optimistic and 50% were pessimistic about the economic situation – cancelling each other out, alternatively 100% felt the economic outlook was completely unchanged, or in reality a combination, perhaps 20% felt the same, 40% were optimists and 40% pessimists. Therefore to get to -12 we must have had a preponderance of pessimists in the survey, for simplicities sake a 44% optimist to 56% pessimist bias. 44 – 56 = -12.

The usual March 2020 monthly survey came in at -9 after -7 in February, but this survey didn’t capture the start of the UK’s CoVID-19 “lockdown” response, GfK have therefore just produced another “Flash Report” covering the period from the 16th to the 27th March…the drop is startling, the index has fallen by 25 more points to -34. This is the biggest month on month fall since records began in January 1974, taking the confidence barometer back to almost equal the lows achieved in the depths of the 2008 financial crisis, but this time getting there in 2 weeks rather than over 12 months. 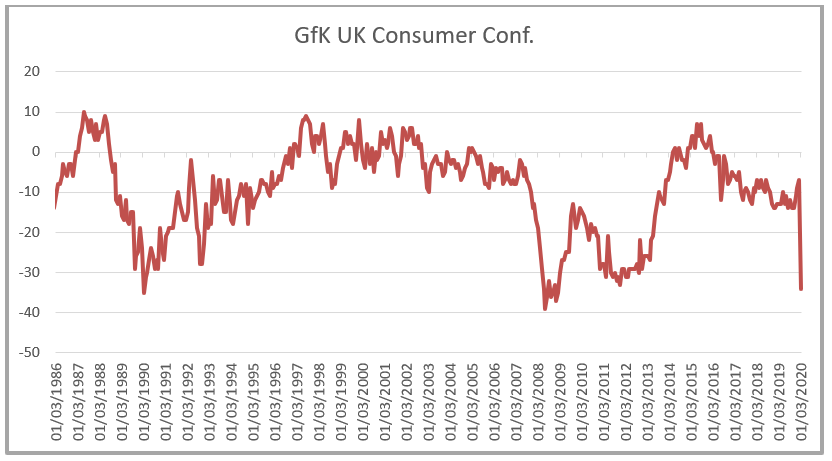 At Arlingclose we feel the measure could yet go lower as the pain of lockdown bites deeper. Our view on the downward leg has long been that below -10 indicates stagnation, -34 could be consistent with petrification and some economists forecast the economy contracting at perhaps 15% or more quarter on quarter. Batten down the hatches, but with a bit of luck not for too long, whilst the pain will be deep we remain hopeful that it will be short-lived.