In the early days of the pandemic, faced with known unknowns (to quote Donald Rumsfeld, ex US Secretary of Defence), economists and forecasters tripped through the alphabet to describe what a recovery might resemble: the classic ‘V’ shaped quick rebound from recession, which has characterised many a past downturn and which the world was hoping for this time round too; the more protracted ‘U’, before business gets slowly back to normal; and the worst-case, a doom laden  ‘L’, in which a deep recession lasts for several years - the great depression which spanned 1929 to early 1933 an example of this.

There was first a small but now a growing number who believe that the economy will encounter a ‘W’ shaped double-dip recession and recovery following the pandemic.  This indeed is the trajectory for UK growth illustrated in the fan charts of the Bank of England’s latest quarterly Monetary Policy Report published this week. Sticking to the alphabet (only because economists tend to, although the Bank doesn’t) the profile can best be described as ‘W‑ish’, not surprising given the Bank views the outlook for the economy as “unusually uncertain”. Following the nascent return to growth in Q3 2020, UK GDP growth is forecast to fall in Q4, largely reflecting lower consumer spending on social activities as the country encounters another lockdown. Growth resumes in early 2021 as COVID-related restrictions are eased but the initial adjustment to the UK’s and EU’s new trading relationship might then temporarily temper trade and activity. If the UK is to trade with the EU without a free-trade agreement from January 2021, resulting in tariffs on some goods and more onerous checks at borders or higher regulatory barriers, these would be expected to weigh on the economy. 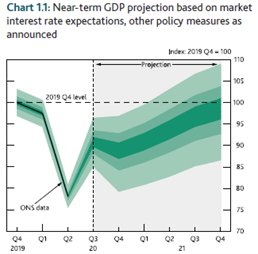 It was therefore not surprising that the MPC’s policy response following its deliberations in November was an additional £150bn QE and maintaining Bank Rate at 0.1%.  There was, though, a notable absence in the meeting’s minutes and in November’s Report of discussion of negative interest rates, quite a change from three months ago when some MPC members had mused about reviewing monetary policy firepower which included the possibility of setting a negative Bank Rate.

If you are wondering why interest rates on new mortgages have increased whilst risk-free rates, i.e. the cost of government borrowing, have been broadly unchanged over 2020, the Bank explains that not only was the recent surge in mortgage applications (at their highest levels since 2007) a result of pent-up demand from lockdown days, they were further boosted by the temporary increase in the stamp duty threshold.  Some lenders who faced operational constraints used pricing as the primary tool to meet demand.  The tightening of conditions for higher loan-to-value lending in recent months also reflected higher borrower credit risk.

More fiscal support has also followed through the extension of the furlough scheme to March next year and the third grant for self-employed income support scheme.  Individuals, business and the economy need all the help they can get to ensure that the second leg in the ‘W’ downturn is not quite so drastic as the first. The Bank can only do so much – the UK government has the main responsibility here and we doubt that this week’s stimulus from both will be the last.