You may know very little about cryptocurrency; you may have spent the last few years carefully building a portfolio of Bitcoin, altcoins and memecoins; or you may even know all about the market and choose to stay away. Whichever camp you fall into one thing is for sure, it is a market that is growing fast and capturing headlines. One such example of this was when El Salvador became the world’s first country to adopt Bitcoin as legal tender in 2021, requiring all businesses to accept the digital currency as a form of payment.

A Freedom of Information (FOI) request made by the New Scientist shows that police across the UK have seized cryptocurrencies totalling more than £322m in the last five years. If you are an Authority that has seized cryptocurrency and needs advice, or perhaps you are a business or individual that wants a detailed and bespoke report on holding cryptocurrency please get in touch using the details at the bottom of this insight.

A cryptocurrency is a digital currency designed to work as a medium of exchange through a computer network that is not reliant on any central authority, such as a government or bank, to uphold or maintain it. The market has been growing in popularity in the last decade and as of the 9th March 2022 has a total market capitalisation of $1.8tn. Bitcoin is the world’s first and largest cryptocurrency; Bitcoin dominance, which measures the cryptocurrency’s market capitalisation relative to the total crypto market, is 43.2%.

Bitcoin reached an all-time high price of nearly $69.0k on November 10th 2021. This has been followed by a large correction of 39.2% to a current price of $41.9k. Bitcoin is considered a volatile asset, in 2021 the average 30 day volatility (against the US Dollar) was 4.6%. For comparison, the volatility of gold averages around 1.2%, while major fiat currencies such as USD and GBP typically average between 0.5% and 1.0%. 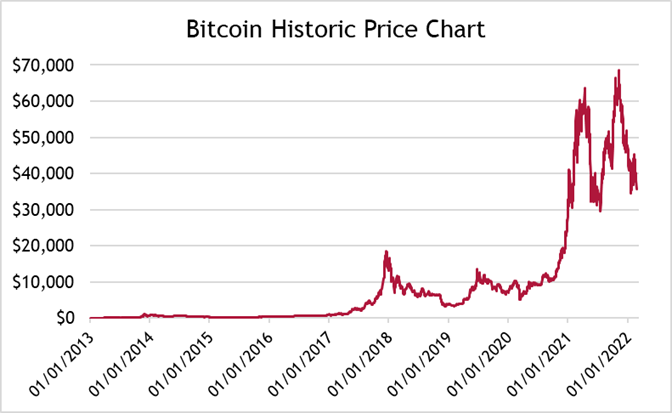 We have seen intra-year price corrections of 94% in 2010, 94% in 2011, 85% in 2015 and 84% in 2018 but despite the volatility and large corrections, it is a market that many investors have found lucrative since its inception over a decade ago. The overall trend and price action for Bitcoin has been positive. The table below shows Bitcoin’s annual returns from 2010: 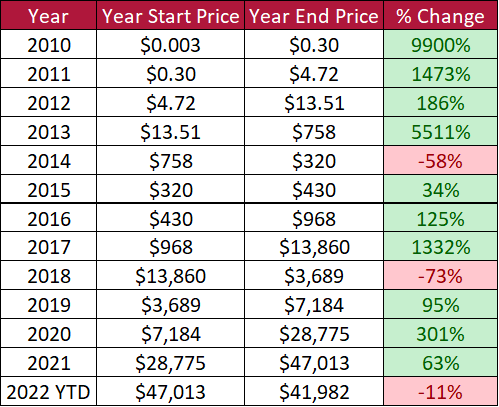 Where should I hold my assets?

There are many ways to hold cryptocurrency and it all depends on each holder’s preference. Whichever you choose, you should ensure that your assets are secure. If you decide to use the most commonplace method, which is holding on an exchange, it is important to note that since 2012 at least 46 cryptocurrency exchanges have suffered major hacks totalling nearly $2.66bn. While the exchange has, in most cases, covered the losses of its users, in some cases it has not covered the full fiat value of the crypto at the time of the hacking.

In January 2018, cybercriminals broke into the Japanese exchange Coincheck and were able to steal crypto worth $534m. This has since been confirmed as the largest cryptocurrency attack in history. Coincheck did allocate a cash compensation to affected users, however, this was less than the value of the coins at the time of the hack.

Mt. Gox was also a Japanese based exchange which at its peak was responsible for more than 70% of Bitcoin transactions. In February 2014, the exchange reported that it had "lost" Bitcoin, with estimates placing the amount of lost Bitcoin at between 650,000 to 850,000 coins. We now know that it is likely that most of the missing coins were stolen straight out of the exchanges hot wallet over time, beginning in 2011. Only about 200,000 were ever recovered and Mt. Gox closed its exchange and filed for bankruptcy in 2014.

Arlingclose has the required expertise and can provide advice on holding arrangements for your cryptocurrency, so that you can be sure that your cryptoassets are safe.

When accounting for cryptoassets it is important to have a full understanding of the conclusions from the International Financial Reporting Standards (IFRS) Interpretations Committee meeting on holding cryptocurrency. You will have to be aware of any accounting treatments (which varies by the type of cryptoasset held), how to measure the Fair Value and what additional disclosures to include in the financial statements.

Despite the rising use of cryptoassets the accounting rules can be vague, therefore, it is vital that investors are provided clarity on what they need to report. Arlingclose can provide tailored and comprehensive advice in this area.

Can it Pay to be Passive