A History of Base Rate Laura Fallon lfallon@arlingclose.com

Base Rate is older than you might think and started when the Bank of England was granted a Royal Charter by King William and Queen Mary in 1694. The original charter stated that the bank was founded to ‘promote the public Good and Benefit of our People’ which actually meant funding wars with France.

Since then the bank has seen us through quite a number of wars, a good few financial crises and more than one pandemic. The graph below plots Base Rate since its beginning . 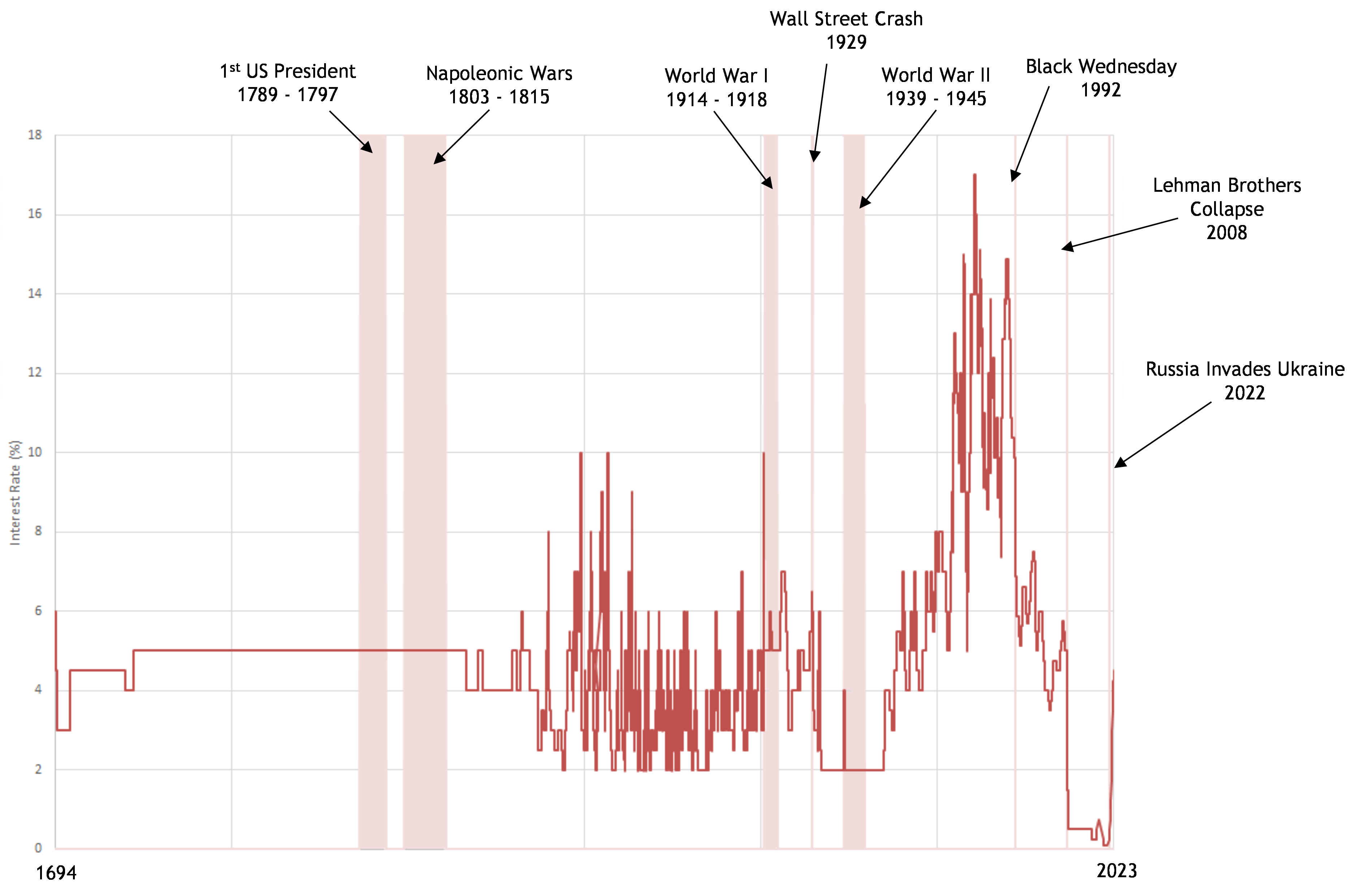 Whilst direct comparisons between now and 300 years ago have their difficulties, some key themes that can be identified from this graph are:

World War I wasn’t great for the economy and neither was the Spanish flu pandemic that followed it. Although interest rates came down following the First World War this seems relatively short lived and they were soon back to higher levels. The Wall Street Crash of 1929 was a financial services-induced crisis in the USA that led to a horrible and prolonged global depression. It is clear that the Bank did respond to this by lowering interest rates to 2% for some time afterwards – however the drop is not nearly as big as it was in 2009 when the next big financial services meltdown happened. Following the Wall Street Crash the idea that governments should not intervene too much in private industry was more widespread than it is today. It took until 1933 for Franklin D. Roosevelt to begin his ‘New Deal’ reforms to use fiscal policy to try to end the economic malaise.

During the credit crunch, however, central bankers did things differently. They lowered interest rates sharply and rapidly, as is evidenced by this graph. The also got the figurative printing presses working through ‘quantitative easing’. The Government as a whole stepped in to stop banks failing by bailing them out with taxpayers’ money and made other fiscal changes such as a temporary reduction in VAT. This massive, unprecedented state intervention may have been controversial but it also largely worked; whilst economic growth may have been lousy with austerity biting over the last decade we have not had a second great depression. Central bankers learnt that sitting by and doing very little while the financial system comes crashing down around your ears is not a suitable policy option.

We are living in extraordinary times. Interest rates fell to new historical lows of 0.5% on 5th March 2009. That was before we had to contend with Brexit (0.25% 4th August 2016) and then the Coronavirus pandemic (0.1% 19th March 2020). These rates aren’t really in the “normal” range of about 2% - 6% seen historically. However, there is a significant school of thought and one that Arlingclose  subscribe to that believes that low interest rates are here to stay for the foreseeable future (“lower for ever”). Low rates for a long time have been seen in other countries such as Japan and raising rates is hard to do without stemming any nascent economic recovery. So, who knows if we’ll see this ‘new normal’ lasting another 300 years?

The 1980s Wasn’t Normal Either

‘Acceptable in the 80s’ didn’t just mean the terrible clothes it also meant double digit interest rates – peaking at 17% on 15th November 1979 but staying high until the early 90s. It is this period on the graph that is most striking and shows up as even more an outlier than the current low rates. Interest rates were so high in an attempt to control inflation and because of an ill-fated experiment at pegging the Pound Sterling to the Deutschmark through the European Exchange Rate Mechanism. Suffice to say that no-one is really expecting a return of this scenario again anytime soon. The Bank of England is now much more independent from the political meddling that caused some, if not all, of this.

Interest Rates Can’t Get Much Lower

It may sound completely obvious but one consistent feature of the line on this graph is that it has always been above zero and now it is right at the bottom. However, the lower rates go, the less room that policymakers have to reduce them further. Having said that, as financial advisors are acutely aware, interest rates do not have to stop at zero and can go and stay below thus line. Once a remote possibility in the UK, the current pandemic may yet see a new historical low being achieved. Negative interest rates have many clear downsides however (not just that it’s incredibly weird to get your head around) and even if they are used they are unlikely to become very large – minus 0.5% might be realistic but not minus 4% or minus 10%. Alongside quantitative easing the Bank of England will need to find more creative ways to stimulate the economy if the next great depression looms.